What are you looking for?

Recollections From The Luthier 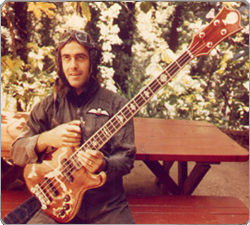 As instruments were completed, Doug Irwin and I would often go into recording studios to meet up with musicians for feedback and hopefully land a sale. One day, our travels brought us to Wally Hiedlers Studios in San Francisco.

We met up with the Jefferson Starship – their bassist, Pete Sears, took a liking to one of our basses.

It was a Wolf-style bass body constructed from Walnut and Maple with sliding Hi A pickups (early Bartolini’s). We lent the bass to Pete for a few weeks. He loved the bass but decided to create a new custom bass for himself.

The Sears project was my first solo; we had recently been contracted by Jerry Garcia to start his “Tiger” so when Pete decided to move forward with a custom bass, the project was handed over to me. Doug also believed that as a bassist I could be beneficial in guiding Pete through the design process.

This pre-build design time enabled Pete and I to become close friends, which we remain today.

During that time period this bass was not only the first Irwin instrument to incorporate Cocobolo it was also the first within the pack of Northern Cal guitar builders at the time. When Pete traveled up to our shop in Santa Rosa and saw the wood spec’d for Jerry’s Tiger; he fell in love with the Cocobolo for the top.

Birdseye Maple was used for the back; the neck was comprised of a three-piece Birdseye Maple and Purple Heart. The fingerboard was Ebony with an inlayed silver wire boarder. Fingerboard inlays were the exact pattern that Jerry’s “Tiger” would employ three years later. I cut Pete’s finger board inlays in Ivory , Mother of Pearl used for Jerry’s.

During the design process   I developed a new deluxe head stock logo  for the company which Pete’s “Dragon” bass was the first D Irwin instrument to don.

Origin Of The Dragon Inlay

It was Pete’s idea to incorporate an ornamental inlay on the face of the instrument. Our frequent conversations resulted in ideas that flowed for several months until he stumbled upon the concept of a Dragon. I drafted several renditions but it was still not quite there. While, at a fellow luthier’s shop, (Steve Klein) we were discussing the Sear’s project, on the spur of the moment Steve drew up a couple of the most amazing dragons I had ever seen.

The final version was a combination of Steve’s Dragon and one of my own. It was comprised of Silver, Mother of Pearl, Ivory and Brass. While I was cutting this particular inlay pattern, I realized that I could incorporate rheostat controlled light emitting diodes behind the Dragon’s eyes to illuminate them. This was done as a surprise for Pete.

Doug and I would often do this sort of thing for our clients. For instance, when we refinished Jerry’s “Wolf”, we turned the Wolf decal Jerry installed on his guitar into an inlayed piece of marquetry.

Jerry couldn’t believe we were able to save the decal. He was a bit stunned after we explained to him that, we did not save the decal but that we had transposed its image into an inlay. We also noticed that Jerry had been using his low E string up at the head stock as a cigarette holder; before the Wolf was returned to him we had designed and installed a Brass cigarette holder.

Pete was equally stunned when he saw the eyes of his inlayed Dragon illuminate. There was also a Wood Nymph inlay created in Silver and Mother of Pearl which was poised above the Dragon.

Pete specified a passive system for the electronics, utilizing a Fender P and J pickup combo. At the time, I was often back and forth between our shop and both the Alembic Cotati shop and Ron’s electronics shop in Sebastopol.. The atmosphere during those days was one of a brotherhood; there was a sharing of ideas and innovative concepts between most of the Northern California Luthiers. So, I called upon Ron Wickersham to help me solve the J bass single coil noise problem.

We scheduled an appointment for him to wind an exact dummy coil to the J bass pickup. While in his presence I also asked if he would help in wiring the light emitting diodes for the Dragon’s eyes. He smiled as only Ron can and said, “Certainly, let me see; yes I have everything I need here.” And before I left that night Ron had been of tremendous help in tying up a few critical final touches for Pete’s bass.

The bass was quiet and kicked  …!

The Disappearance Of The Bass

Today, I refer to this bass as a Wolf in Sheep’s clothing because the body design was the same as the Wolf but drafted slightly larger to accommodate a bass guitar. I recently realized an interesting fact – the custom bass I built for Pete was an ornamental body design of Doug’s and the guitar Doug built for Jerry was one I had created.

June 17th 1978 was a day that broke many hearts!
Click Here To Read The Story of how the Bass was lost

The Reappearance Of The Bass

Inlayed into the Cocobolo face is a Silver, Brass, Ivory and Mother of Pearl Dragon.  Accompanied by Silver, Mother of Pearl and Abalone winged Pixie, sitting and overlooking the Dragon.